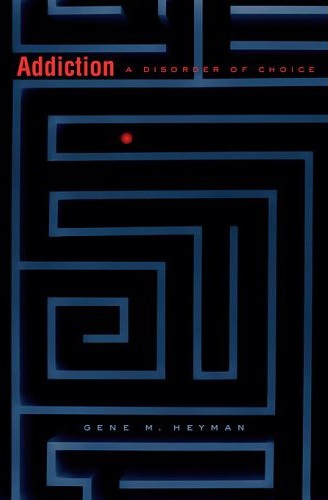 “Drawing on psychiatric epidemiology, addicts’ autobiographies, treatment studies, and advances in behavioral economics, Heyman makes a powerful case that addiction is voluntary. He shows that drug use, like all choices, is influenced by preferences and goals . . . . just as there are successful dieters, there are successful ex-addicts. In fact, addiction is the psychiatric disorder with the highest rate of recovery. . . . Heyman’s analysis of well-established but frequently ignored research leads to unexpected insights into how we make choices—from obesity to McMansionization—all rooted in our deep-seated tendency to consume too much of whatever we like best. As wealth increases and technology advances, the dilemma posed by addictive drugs spreads to new products. However, this remarkable . . . book points to a solution. If drug addicts typically beat addiction, then non-addicts can learn to control their natural tendency to take too much.” (from Harvard University Press)

“What Heyman is offering, in effect, is a global theory of addiction, with elegant and seemingly irrefutable answers for all the great imponderables in the field: why people start abusing substances, why most of them stop by the age of 30 and why a smaller percentage end up relapsing…Heyman bases his assertions on how people and animals make choices in experimental settings.”
-Jessica Warner, The Globe and Mail, Aug 15, 2009

“Whatever your views on drug use, Heyman’s book is very helpful for understanding the nature of drug addiction.”
-James Q. Wilson, Claremont Review of Books, Winter 2009

“It’s refreshing to see an experimental psychologist place his work in the grand context of the larger behavioral and social sciences so that the unique perspective afforded by a single theory can be appreciated and its relation to other levels of explanation articulated.”
-Kenneth Scher, PsycCRITIQUES, 2009

“Economists with any interest in behavioral phenomena should all read Heyman’s book.”
-Don Ross, Journal of Economic Psychology, February, 2010

“Addiction: A Disorder of Choice is an invaluable tutorial in how to think about drug addiction.”
-Sally Satel, The Book: An online review at the New Republic, March 15, 2010

“If you have an interest in the nature of addiction, this book is for you. Addiction: A Disorder of Choice is a clearly articulated text containing the personal accounts of current and former drug users, logic and a significant body of scientific data from epidemiology and treatment outcome studies.”
-Steven Gruenert, Drug and Alcohol Review, March 2010

“Could the disease of addiction actually be a behavioral disorder of choice? Dr. Heyman’s thought-provoking book, well worth the read, may change your mind.”
-David W. Hunt, MD, Journal of Addictive Diseases, July 2010.

“In this brief and readable volume, Gene Heyman provides a spirited, cogent rebuttal of the prevailing wisdom that addictions “hijack” the brain. . . . . All told, this is an important book that provides a refreshing alternative to recent formulations of addiction suggesting that ‘anatomy is destiny.’ Anatomy is not destiny. Not even neuroanatomy.”
-Bruce Rounsaville, MD, Journal of Nervous and Mental Disease, August, 2010.

“Addiction: a Disorder of Choice is a very different book, that is highly scholarly in its style, grounded in clear research and has a fascinating attention to detail.”
-Gregory Westlake, Existential Analysis, 2010

“Heyman’s book will be read with interest by anyone involved in the prevention or treatment of drug addiction as well as by those engaged in work with individuals who engage in any form of self-destructive behavior.”
-Arthur Hohmuth, Transactional Analysis Journal, April, 2011.

“The book is well written. It challenges the idea that addiction is a brain disease and emphasizes the normal patterns of drug use and the role of voluntary behaviour. . . . at least in some cases, voluntary behaviour can be an engine for change out of addiction.”
-Reinout W. Wiers, Addiction, February, 2011.

“I very much enjoyed reading this book, because it challenges concepts that many of us have become used to hearing and to which we have stopped applying our critical sense.”
-Fillippo Passetti, Psychological Medicine, February, 2011